On the meaning of digital social innovation 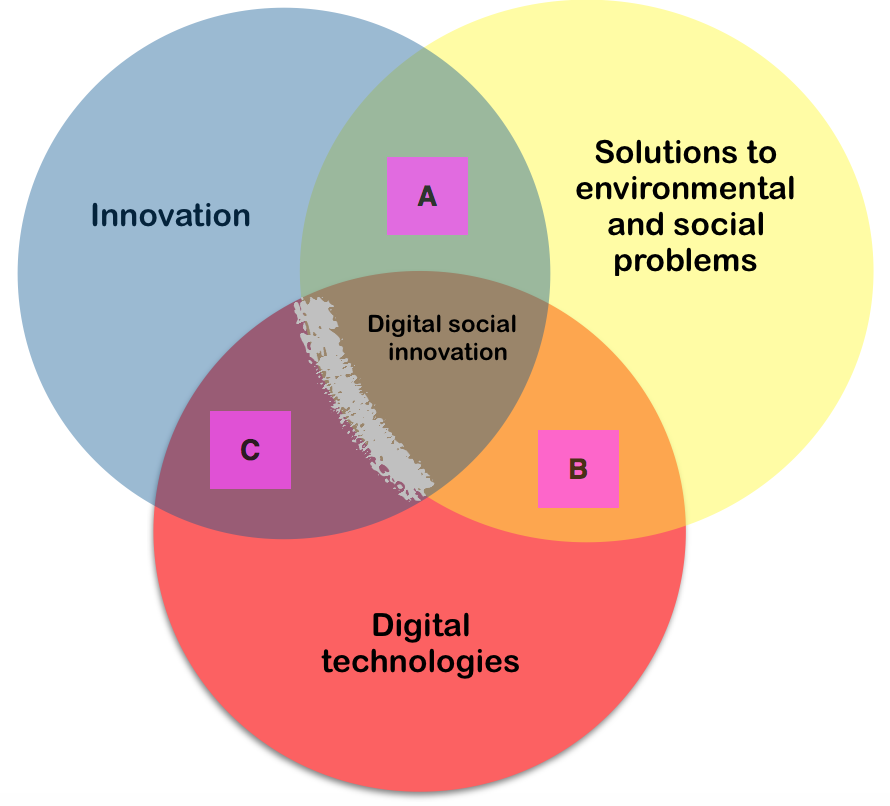 In our opinion, digital social innovation lies at the intersection of three spheres; innovation, social and environmental problems, and digital technologies. The first sphere is innovation. It refers to the development and diffusion of a (technological, social, …) novelty that is not used yet in the market or sector or country where it is being introduced. The second sphere concerns the solutions put in place to address social and environmental problems, for example through public policies, research projects, new practices, civil society actions, business activities, or by decentralising the distribution of power and resources through social movements. For example, social inclusion measures facilitate, enable and open up channels for people to participate in social life, regardless of their age, sex, disability, race, ethnicity, origin, religion or socioeconomic status (cf. e.g. the positive discrimination measures which enable students from minorities to enter universities). Finally, the third sphere relates to digital technologies, which concerns hardware and software technologies used to collect, process, and diffuse information.

Many digital technologies are no longer considered innovations in 2017, at least in Europe where they have become mainstream. For example, according to Eurostat only 14 % of the EU population have never used the internet. On the other hand, some digital technologies are novel ones (area C in the figure), such as the service Victor & Charles which enables hotel managers to access the social media profile of their clients in order to best meet their needs.

As regards the yellow sphere, many of its solutions to social and environmental problems are neither digital nor innovative. They relate to more traditional ways of fighting social exclusion or pollution for example. To name but a few, in order to solve housing problems in France, the HLM system (Habitations à Loyer Modéré) was introduced after the Second World War to provide subsidised housing to modest households. When introduced, it was an innovative solution, but it has now institutionalised.

At the intersection between the solutions and digital technologies spheres we find the area B which does not intersect with the blue innovation sphere. There we find digital solutions to social and environmental problems which are not innovative, such as the monthly electronic newsletter ATOUTS from OPH (Fédération nationale des Offices Publics de l’Habitat), a federation of institutions in charge of the HLM system, which uses the newsletter to foster best practices among HLM agencies in France. As for non-digital innovations aiming to solve social and environmental problems, they can be found in area A. For example, the French startup Baluchon offers affordable wooden and DIY micro-houses that enable modest people to become independent dwelling-wise. As for area C, it concerns innovative digital technologies which do not aim to solve a social or environmental problem, such as a 3D tablet.

In the area where the three spheres intersect lie digital social innovations. DSI can thus be defined as novelties that use, develop, or rely on digital technologies to address social and/or environmental problems. They include a broad group of digital platforms which facilitate peer-to-peer interactions and the mobilisation of people in order to solve social and/or environmental problems. For example, the Ushahidi application, designed to map violent acts following the 2008 elections in Kenya, aggregates and diffuses information collected by citizens about urban violence, which enables citizens and local authorities to take precautionary measures. Along similar lines, the Egyptian application Harassmap collects cases of sexual harassment reported on its platform, which allows women to avoid dangerous areas (Source: Banque Mondiale (2014), Rapport sur le développement dans le monde, p. 153). A similar application was developed in France under the name of App-Elles. It enables girls and women who are victims of an assault to alert the police and other contacts. As for the I Wheel Share application, it facilitates the collection and diffusion of information about urban (positive and negative) experiences that may be useful to disabled people. Two last examples involve the use of a digital hardware (other than a smartphone). First the KoomBook, created by the NGO Librarians Without Borders, is an electronic box using a wifi hotspot to provide key educational resources to people deprived of Internet access. Second, the portable sensor developed by the Plume Labs company, which can be used as a key holder, measures local air pollution in real time and communicates the data to the community.

But as it always happens with categorisations, boundaries are not as clear-cut as it may seem on a figure. In our case, there is a grey area (the fuzzy line in the figure) surrounding digital social innovations. For example, if a technology makes it easier for a lot of people to access certain goods or services (short term recreational housing, individual urban mobility, …), does it solve a social problem? The answer is clouded with the positive meaning attached to digital innovations, which can conflict with their actual negative social and environmental impacts (e.g. they might generate unfair competition or strong rebound effects).

Take the case of AirBnB: according to our definition, it could be considered as a digital social innovation. It relies on a digital platform through which a traveller can find  accommodation while possibly discovering local people and lifestyles, and otherwise idle resources are put into use. Besides avoiding the anonymity of hotels, tailored services are now offered to clients of the platform. Do you want to take a koto course while having your matcha tea in a Japanese culture house? This AirBnB ‘experience’ will cost you 63€.

On the one hand, AirBnB enables (some) people to earn extra income, on the other it helps travellers access a wider array of local experiences. But the system also facilitates replacing established, institutionalised capabilities and knowledge, and excludes locals deprived of digital literacy (as well as of extra dwelling space located in hyper central urban areas). While AirBnB customers might enjoy the profusion of offers available on the platform as well as local cultural highlights sold in a 2-hour pack, an ignored local culture lies on the poor side of the digital (and economic) divide.

Without having robust indicators of the social impact of DSI, it is difficult to clarify this grey area and to solve the problem of definition. But constructing ex-ante and ex-post indicators of social impact is not easy from a scientific point of view. Moreover it is difficult to obtain user data as innovators keep them proprietary, which impedes research to a great extent. In addition, innovators and other ecosystem members can engage in “share-washing” and conceal commercial activities behind a smokescreen of sharing activities. An important step towards overcoming these difficulties is to foster an open debate about how profits obtained from DSI are distributed, about who is prevented (or excluded) from using DSI and why, and about the contextual factors that ultimately
shape DSI social impacts. Troublesome as definitional issues maybe, researchers should not reject the term altogether for being too vague, since there is indeed a category of DSIs having a strong transformative power regarding empowerment and sustainability. But neither should they impose a restrictive categorisation of DSI, in which Uber and AirBnB have no place. The involvement of a broad variety of actors (users and non-users, for profit and non for profit, …) in the definition of this public construct would do justice to the positive reputation of DSIs.

1 réponse à On the meaning of digital social innovation